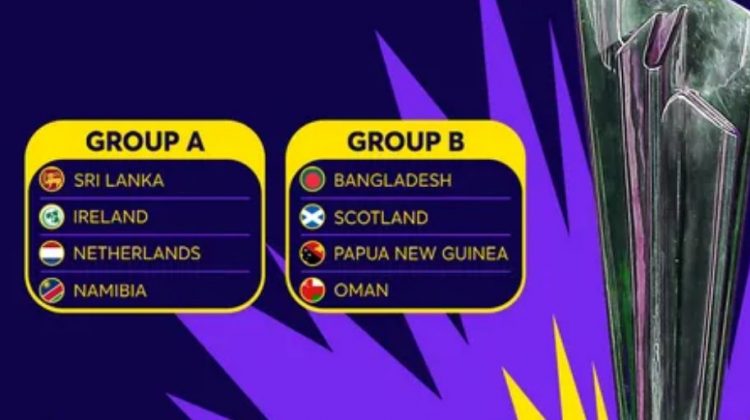 The Coming T20 World Cup will be played in two stages and in two different countries. Round 1, also known as the qualifying round, has eight teams. Oman will host the Qualifying Round while UAE will stage the Super 12 Round.

These Eight teams are divided into two groups, Group A and Group B. Here is the list of the two groups.

The top two teams of each group will qualify for the Super 12 Round. In the Super 12 round, they face the real buzz by facing giants like West Indies, India, Pakistan, New Zealand, Australia, England, Afghanistan, and South Africa.

Sri Lanka and Bangla Desh are the qualifying round of the ICC T20 World Cup 2021 for men. It looks shocking that a team Like Afghanistan has qualified directly, and these teams have to play Round 1 and have to attain 1st or 2nd position in their groups to reach the main round. As a result, their chance to win the trophy has down a great deal.

According to the new Schedule of the ICC T20 World Cup 2021, Round 1 will start on 17th October and finish on 23rd October. After completing the first round then there will be a beginning of the round Super 12 which will bring more exciting cricket to watch.

Oman, the host, now has a real chance to target one of the top teams in the group and qualify for the second round. Oman has to target Bangla Desh or Scotland to confirm its seat in the next round.

There will be nail-biting contests between Sri Lanka, Ireland, and Netherlands, in Group A. In Group B, Bangla Desh, Oman, and Scotland will work hard to secure their place in the Super 12. PNG and Namibia are still very new to stamp their authority, but we can’t write them off3s; they can also surprise any team.