England is one of the strongest competitors of Pakistan. Both the teams display brilliant cricket on the field. In the ICC Cricket World Cups, Pakistan and England meet each other 3 times. England leads the winning run by 2-1. Let’s have a detailed look at both the ICC T20 World Cups teams and how it will affect their performance in the coming ICC T20 World Cup 2021.

Pakistan won the toss and decided to field, and in the end, it was a wrong decision as England posted a massive total of 185/5 in 20 overs. Luke Wright displayed an all-round performance. He scored 34 and picked the precious wicket of Shoaib Malik.
In response, Pakistan only managed to score 137/7 in their 20 overs. Pakistan lost the match by 48 runs. It was a significant loss that affects Pakistan’s run rate a great deal.

Both the teams missed out in the first edition in South Africa, in 2007. The journey started from the following ICC T20 World Cup that was held in 2010. England was staging the event. For the first time in the history of the ICC World Cup, England won a world cup trophy for the first time.

England won the toss and wisely decided to field first. Pakistan posted an average total of 147 for the loss of 7 wickets. In response, England chased down the total with ease courtesy to Kevin Pietersen, who played a match knock of 73 unbeaten. He was the Man of the Match.

England won the toss and went for batting, thinking of setting a massive total and under pressure Pakistan while chasing that total. But they only managed to score 135/7. Wahab Riaz bowled exceptionally well. He took 3 wickets for just 18 runs in his spell of four overs.

Pakistan, in response, chased down the total within 15 overs. It was a thumping victory. Pakistan won by 9 wickets, leaving 37 balls. Wahab Riaz was the Player of the Match.

Pakistan and England are not in the same group in the Super 12 round. So, both the teams can only face each other if they qualify for the Semi-Final of the coming ICC T20 World Cup 2021. 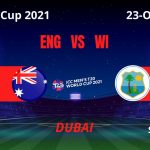